Mmmm maple syrup…it’s good on pancakes, on waffles, French toast, apple fritters… I’ve even had it in the best chicken gravy I’ve ever tasted. To me, and many Canadians, it’s an almost mystical syrup which makes just about anything taste better. Oh, and did I mention it’s made from all natural ingredients, specifically boiled down syrup from maple trees, making it both nutritious and calorie free!*

So, how excited was I to realise the world’s largest maple syrup festival was taking place in Elmira, Ontario? Extremely!

Elmira is a normally quiet town in South-Western Ontario, which comes to life each year during the maple syrup festival. It’s main street becomes flooded with thousands of people from across the world who come to celebrate the brilliance of maple syrup. 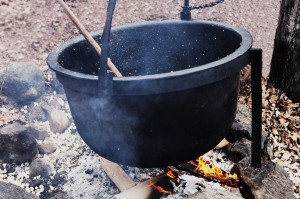 Among the highlights of the festival include trips into the sugar bush to see how the sap of maple trees is collected and then reduced into the sugary goodness that is maple syrup.   The annual pancake relay race is also a major highlight of the event, alongside good ol’ fashioned log-sawing, live music acts, pony and wagon rides, and eating. Lots and lots of eating.

There was quite a large selection of food, for a maple syrup festival.  Everything from traditional pancakes, to kebobs, and fudge to giant pickles on a stick. And don’t forget the range of maple sugar products on sale!

Traditional arts and crafts were also available to purchase among the festival’s numerous booths.

For me though, it really was the sugar bush tour that made this festival great.  Learning how my favourite breakfast syrup is made only helped make it feel all the more special. And of course, I couldn’t pass up the chance to buy a bottle of the good stuff before heading home. It’s just too good to miss!

*may not be entirely true.