While eating my breakfast on the balcony, I spotted what appeared to be a bright green parrot fly to a nearby tree and perch on a branch. Moments later, a second bird of the same colour flew to the same tree and perched out of sight in the leaves.

“Did you see that?” I asked Dave,”it looks like a parrot just landed in that tree over there. I’m going to go grab my camera and see if I can get a better look”.

I scrambled inside and grabbed my camera, holding my breath and hoping that the bird would not fly away before I managed to snap a photo.

I stepped onto the balcony, raised the camera to my eye and looked through the viewfinder. Slowly, the bright green bird slowly came into focus. 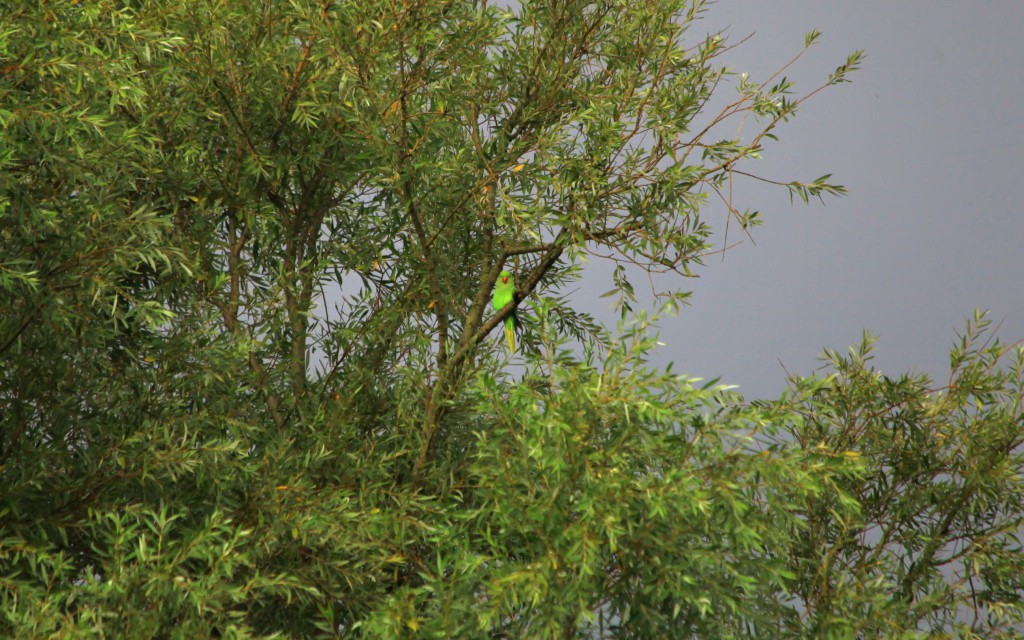 “Oh my…it looks like a parrot,” I stated excitedly. “But there were two of them. Surely someone didn’t let two big parrots escape? I have to look into this!” Taking a final sip of my coffee, I stepped inside, switched on my computer and started my research.

My findings suggest that these exotic birds actually live wildly in Amsterdam. Called Rose-ringed Parakeets, they’re originally from Africa and India; although, they are popular pet choices around the world because of their ability to mimic the human voice.

Some of the reports I’ve read speculate that a pair of these parakeets were released into Amsterdam in the 1970s by their owners and have since gone on to breed in the city, creating a feral population of over 10,000 birds (that’s a lot of breeding!).

Whether or not that’s how it actually happened though, it seems these parakeets are non-migratory, so they won’t be going anywhere this winter. Looks like we’ll be enjoying a little piece of parrotdise here in Amsterdam!

Have you ever discovered something you weren’t expecting to see on your travels? What was it?