I was running 20 minutes late when I arrived at the meeting point where I’d arranged to meet Paolo, a local who’d agreed to show me the city. “I’m so sorry to keep you waiting” I muttered, shuffling my bag on my back. “I took a wrong turn and ended up on the wrong side of the Acropolis.”

“No problem,” he replied. “Shall we head off? Where would you like to go?”

“Can you show me the city as you see it? Maybe take me where the locals go?”

“Of course, that’s what I’m here for,” he declared with a smile as he led me down the cobbled roads of Athens.

Paolo is one of about 100 local Athenians who volunteer for the This Is My Athens program, a city-run initiative designed to give visitors the chance to experience the city with a local. Each tour is customized to the participants’ interests, offering the chance to see a side of Athens often overlooked by tourists. 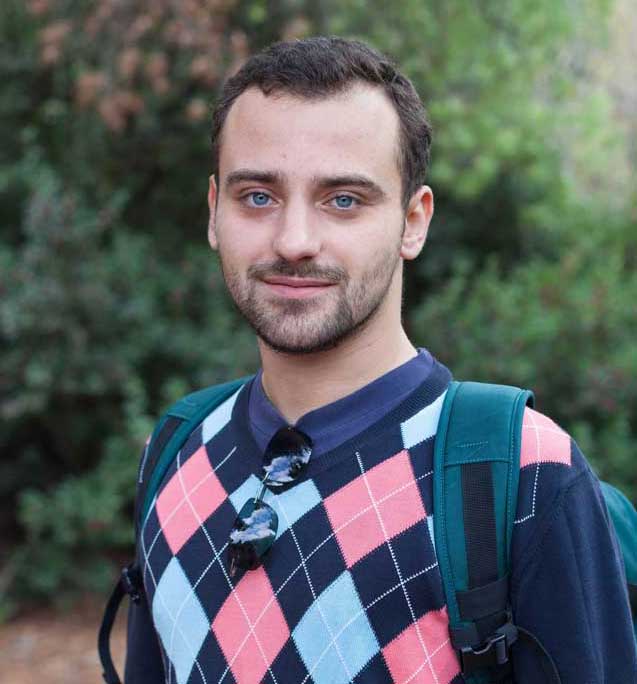 Paolo took me on a tour around Athens as part of the This is My Athens program.

“It’s really up to you what we do with the time,” Paolo explained as we wandered past the Library of Hadrian. “I just can’t take you through the museums or tourist sites and give you a guided tour there, but I can take you on a walk through the city.”

“That’s fine. I’m more interested in seeing how the locals live then checking out the tourist sites”, I said distractedly, watching as a middle-aged man hurried past us, flicking a string of beads between the fingers in his right hand. The beads made a loud clanking noise as they smacked together. “Hey, why do I keep seeing men playing with beaded bracelets in their hands?” 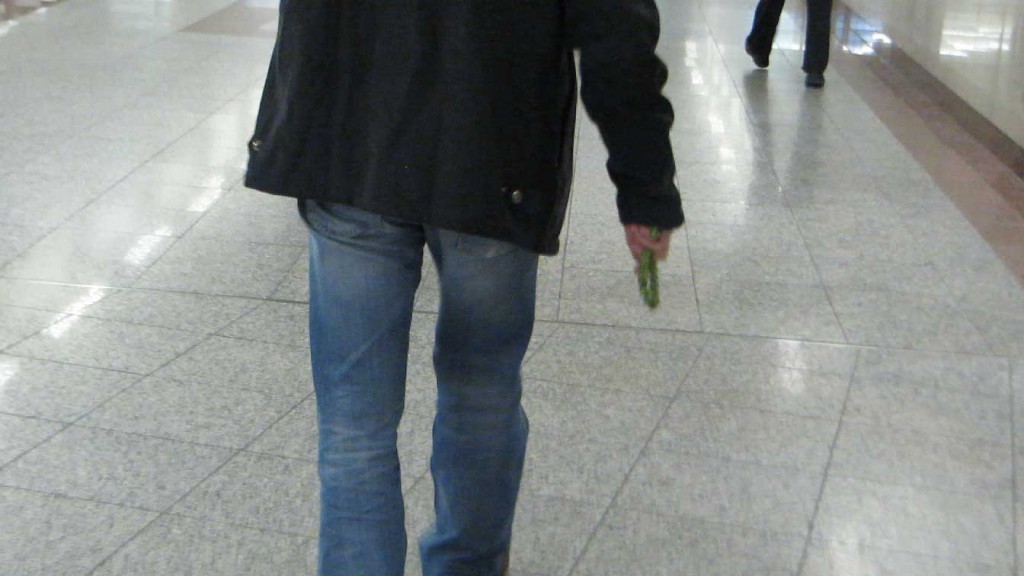 An Athenian plays with beads in his right hand

“What?” Paolo looked confused until he saw where I was pointing. “Oh, those are called kombolói. There’s no real point to them really, they’re just used to pass the time. I suppose some also use them to count their prayers, but that usually happens more in other countries than in Greece. Here, they’re mainly used to occupy the hands”.

“What about the riots in Athens? Do you still have them?” I asked, eyeing up a group of police officers standing across the street. Their cheerful conversation, interspersed with sweeping glances across roads, contrasted against the machine guns dangling around their waists. 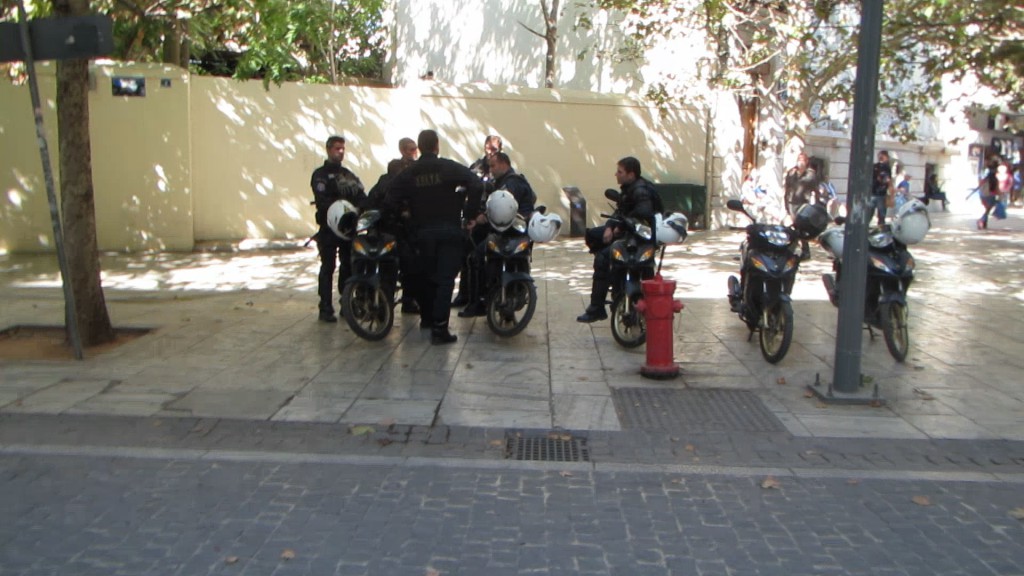 A group of police officers stand and chat in Athens

“Nah, nothing really since 2012, the city has been safe, and even then it was safe for tourists. Although,” he stopped and looked at me, his blue eyes sparkled mischievously, “there is an area popular with anarchists here. Want to see?”

A smile spread across my face. “Isn’t it obvious?”

We hopped on to the metro and took off towards Exarcheia, a neighbourhood to the north of the city famous for it’s history with Greek anarchists. Like many other areas in town, graffiti and street art was sprawled across the buildings.“You see how the graffiti here is mainly red and black?” he pointed towards the walls of the apartment building beside us. “Those are political messages.” 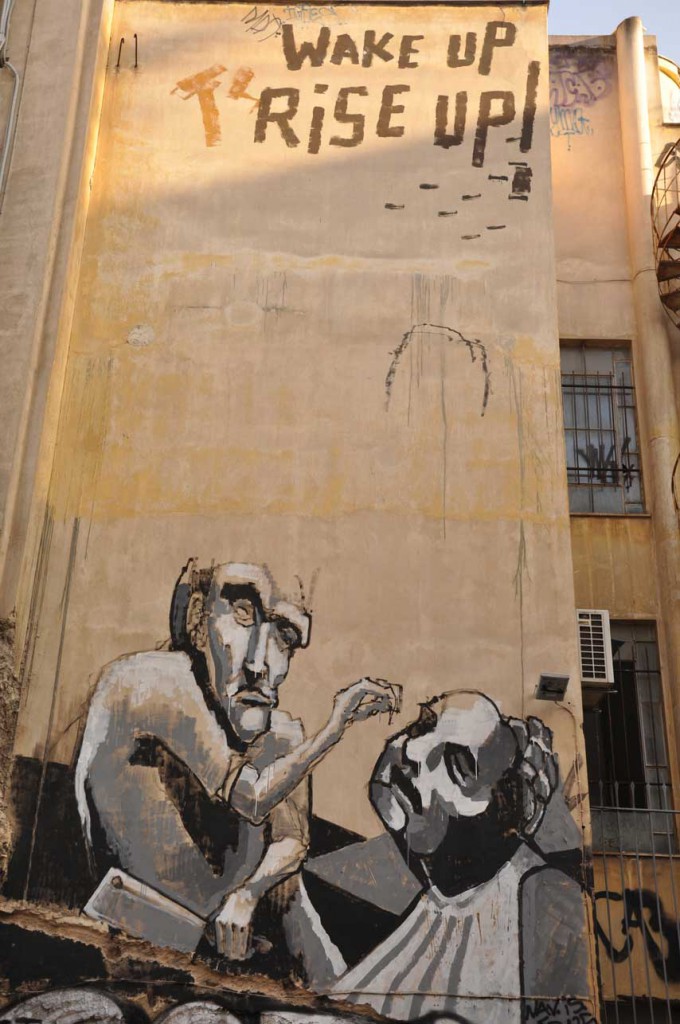 I admired the scrolls, some were written in Greek and some in English. As we turned the corner I found myself across the street from a trio of officers in full riot gear and shields. “What’s going on? Are we safe here?”

“Yes, no problem,” he smiled. “This is the headquarters of the Socialist Party. The police stand here to protect it against the odd anarchy attack. It doesn’t really happen though. We’re safe here, but I think it would be better to go for something to eat. Are you hungry?”

“Good, I know somewhere we can go.”

We turn back and head towards the centre of town. Twenty minutes later, we’re standing outside of a small tavern called Filema. “This is one of my favourite places to eat and it serves traditional Greek food. Is this ok?”

We take our seats on the patio and peruse the menu. Moments later, a waitress brings a basket of bread and two glasses of water to our table. She and Paolo converse in Greek and he places our order: Dakos, a traditional Cretan dish including crushed tomatoes, olive oil and soft cheese on top of stale pieces of oat bread; fried zucchini balls; and beef burger patties stuffed with cheese and served with rice and salad. We sit and share the plates of food and I savour the contrasting textures in my mouth: the crunch of the bread mixed with the soft, salty taste of the tomatoes and cheese, and the creamy, texture of the zucchini balls as they melt in my mouth.

As we eat, Paolo chats happily about his life in the city. We hardly notice as the sun disappears behind the clouds, the temperature cools and the wind picks up. I wrap my arms around myself, glad we’re sitting under a heated lamp.

“Are you cold?” Paolo asks. “We can head off now, or check out a bar if you want? What would you like to do?”

“A bar sounds good,” I say, rooting through my bag for cash to settle the bill before we head back to the streets of Athens.

Minutes later, we arrive at our destination, a bar called “TAF”, and Paolo pushes open the intricately designed door. We step inside and the sounds of live jazz music and excited conversation fill the air. Moments later, I see an indoor court yard before me; trees decorated with fairy lights grow through the concrete floors and small rooms featuring local artwork surround the space. We take a seat at a small, round table close to the band. 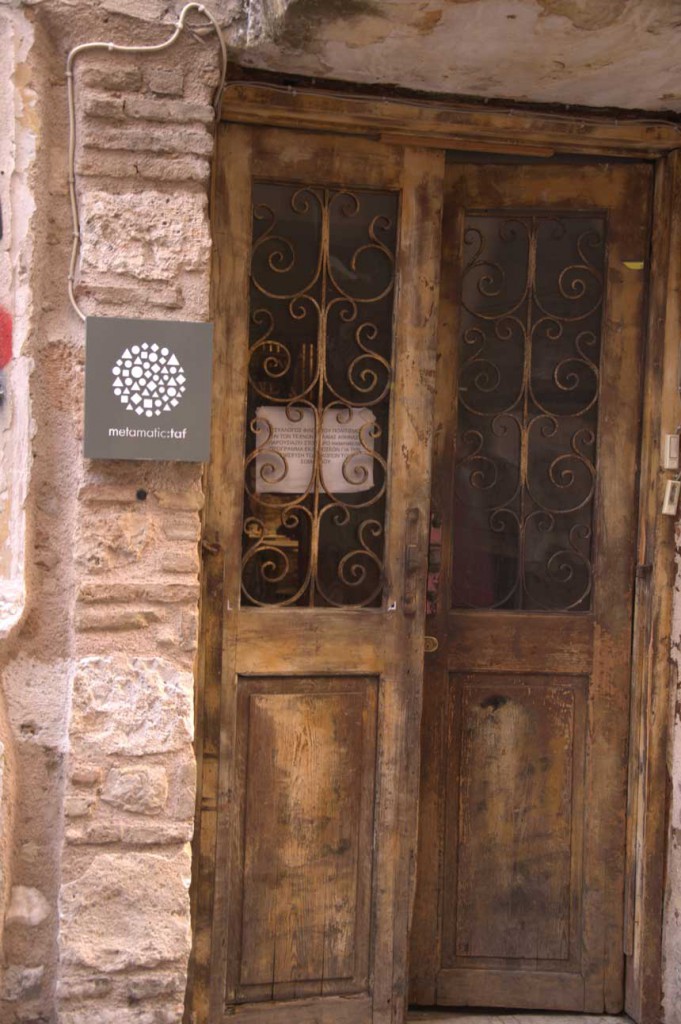 I just love this door which leads into the TAF bar. Photo courtesy of Paolo Todesco. 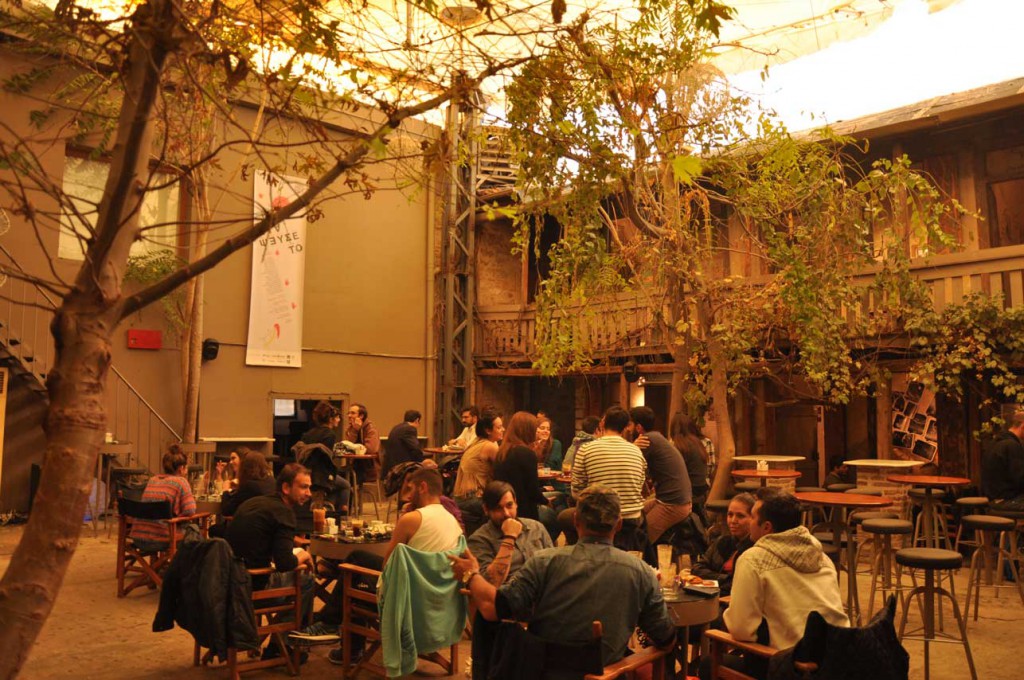 A view of the fantastic courtyard at TAF in Athens. Photo courtesy of Paolo Todesco.

“Would you like me to recommend a Greek drink? There’s Ouzo, some Greek beers here, or you might enjoy Tsipouro. It’s a local spirit made from distilled grapes.”

“That sounds good, I’ll try the Tsipouro”, I say and watch as Paolo places our order in Greek with the waitress.

I turn my gaze towards the Rastafarian man singing at the microphone. His voice is deep and soothing, but his patterned clothes show off his bold personality. His partners, two Greek men, keep pace on the keyboard and drums. The waitress delivers our drinks in small wine-like glasses and places our bill on the table. The drink is strong and tingles as it slips down my throat, warming my chest. We sit and listen to the music play as we sip at our drinks.

“I love this place,” I explain. “It has such a fantastic vibe to it!” 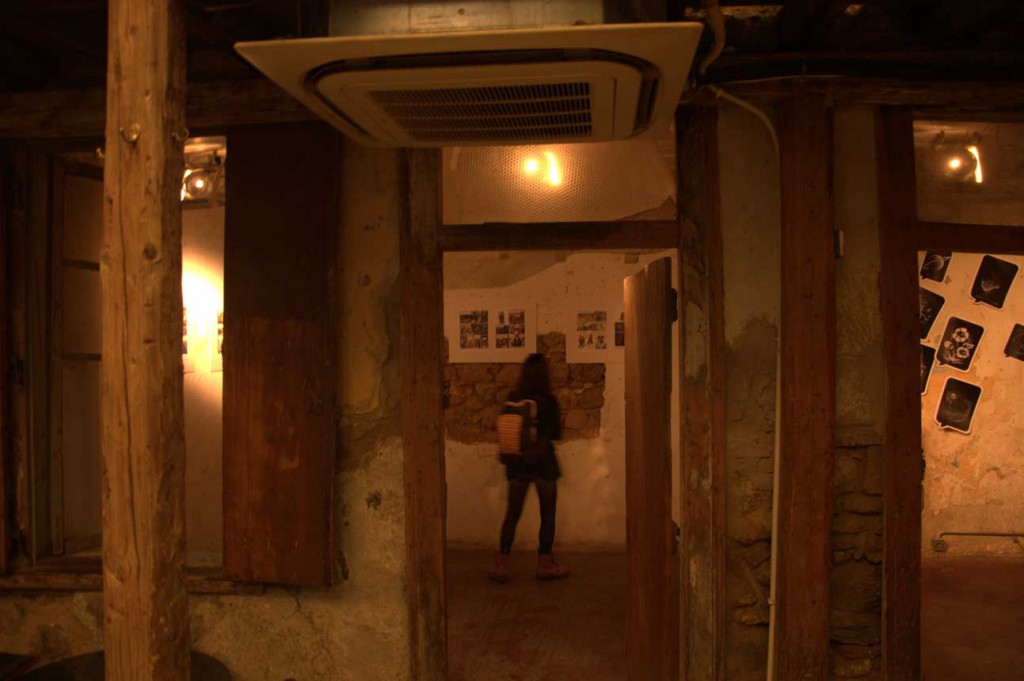 A woman admires the artwork inside one of the small side galleries in TAF. Photo courtesy of Paolo Todesco.

“Yes, I really like coming to this place,” Paolo replied. “This is the first time I’ve seen them play live music though. It makes a good venue, doesn’t it?”

I nod and wonder if there’s time for us to check out one more bar before our tour comes to a close.

“Sure, why not?” Paolo responds. We finish out drinks, pull on our coats and head back into the cool October air. We wander a short distance before turning down a back-alley.

“It’s alright”, he reassures me as he presses a button at the side of an unmarked door. Seconds later, a harsh buzzing noise fills the air and the door is unlocked. He pushes the door open and we slip down the stairs, lit softly by glimmering coloured lights, towards a basement. Rhythmic music sails through the air as we enter an intimate lounge. I realize gleefully that this is my first venture into a SpeakEasy bar.

We take a seat close to the bar. Blue back-lighting illuminates the glass liquor bottles, casting coloured light against the walls. A waitress quickly appears and places glasses full of water on the table in front of us. We take a moment to review the menu and order cocktails. While Paolo places our order, I gaze across the room admiring the groups of friends, huddled in quiet corners, catching up over lost time and the lovers sitting together, lost in each other’s eyes.

Within minutes, the waitress returns and places our drinks on to the table. I admire the look of my blackberry cocktail, served in a crystal tumbler, and taste the sweet, sour liquid on my lips. As we sit and enjoy the atmosphere, I realize the bar is much like Athens; full of mystery, playful surprises and camaraderie.

My tour with a local had led me to some unexpected places; over the day I’d managed to see a side of Athens I would have otherwise missed. Speaking with Paolo gave me insight into life in the city and he’d answered more questions on the tour than a guidebook would have been able to answer.

As we finished our drinks and said our goodbyes, I realized I’d found a new favourite way to explore new cities. I just hope more cities adopt this fantastic program!

Thanks to This Is My Athens and Paolo Todesco for my tour with a local.

For more information, or to apply for a tour, visit This Is My Athens.