It was a bright, sunny day in Barbados, when Dave and I walked towards a small wooden bus shelter and waited for a bus to Bridgetown, to watch the annual Crop Over parade.  The birds chirped happily as small cars zipped past us on the narrow streets. Within minutes,  a small yellow and blue bus spluttered its way towards us and a tall Bajan man peered through the open doorway towards us, urging us to hop quickly on board and find a seat before paying the fare.

The bus was cramped and run-down, alive with the sound of cheerful calypso music which played loudly from the speakers. Dave and I squeezed through the aisles and nestled into two seats at the back. Several minutes passed before the tall Bajan man sauntered down the aisle and collected bus fare from all of the recently boarded passengers. 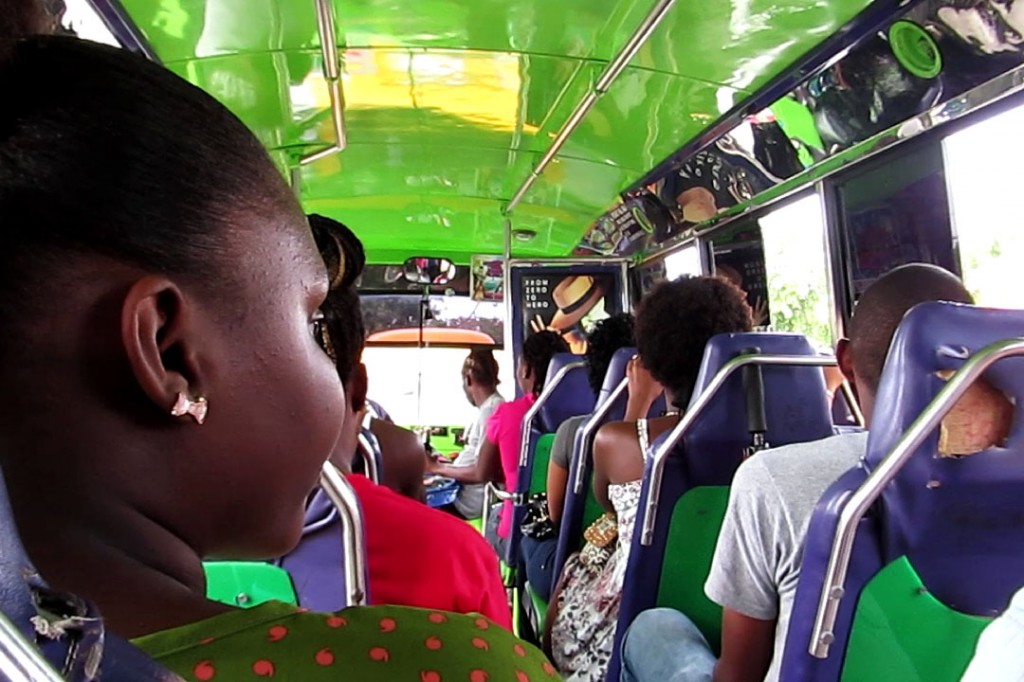 It was a tight squeeze inside the bus that took us to Bridgetown.

Over the next 45 mins to an hour, our bus traveled up the scenic blue coastline, passing holiday resorts and small villages before entering the capital city. We passed brightly painted art galleries and shanty fast food joints before turning suddenly into the downtown district. Moments later, the bus pulled to the curb outside of a large, grey department store and the driver shouted out that we’d arrived at our stop. We quickly sucked through the aisles, aware of the drivers’ impatience for dwadling, and stepped off the bus and into the heart of Bridgetown. 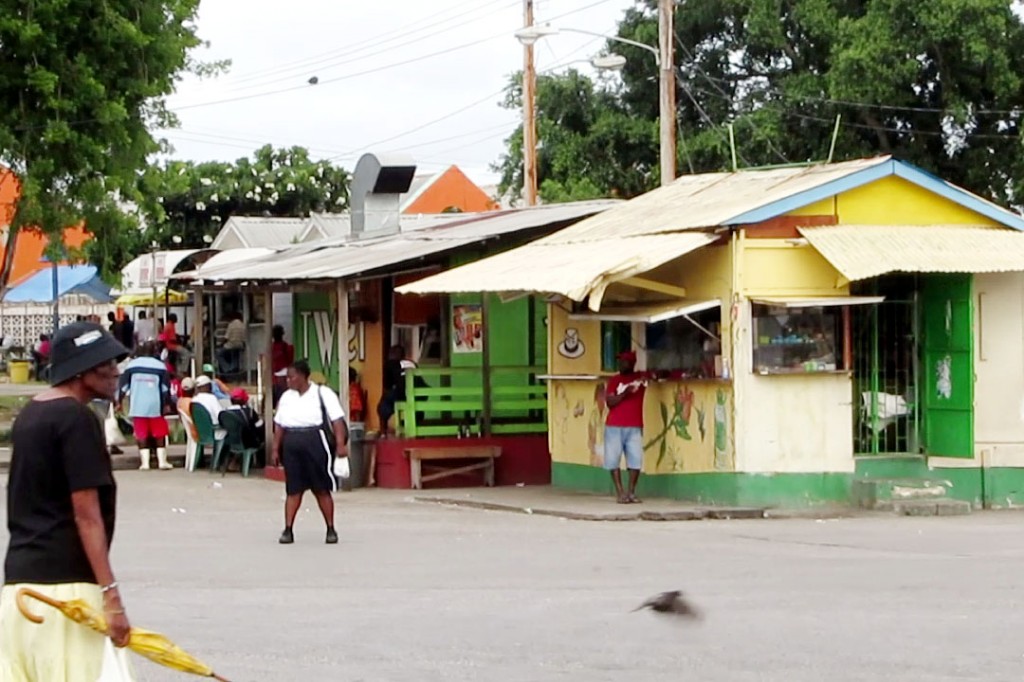 Colourful shacks near the bus station in Bridgetown.

We stood briefly to take it in before being shuffled along by the flow of people on the narrow streets.  We wandered the area to gain our bearings and quickly noted the streets were a strange mixture of regal parliament buildings, brightly coloured streetscapes, public parks and run-down structures hidden behind barb-wired fences. 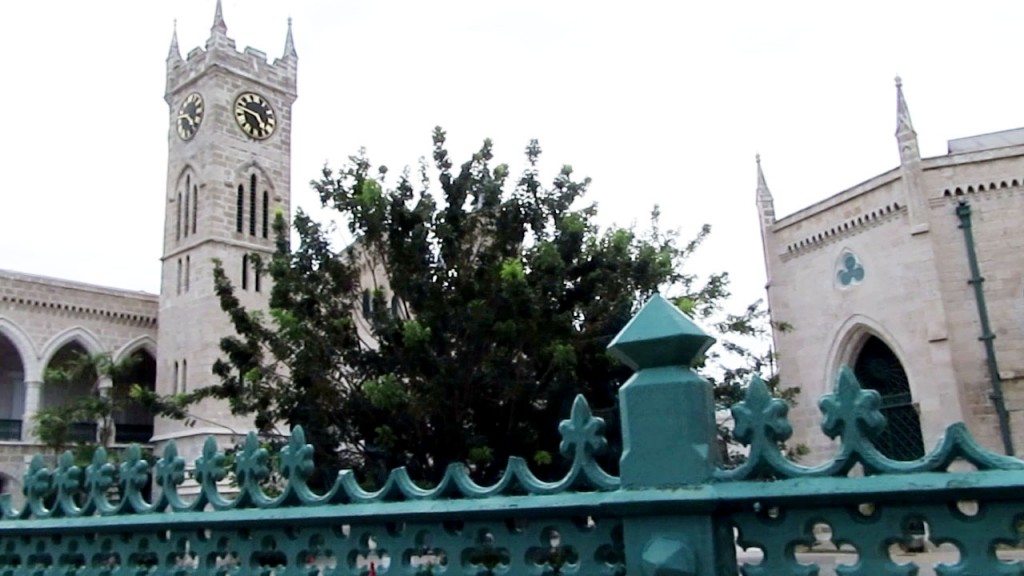 The parliament buildings in Bridgetown. 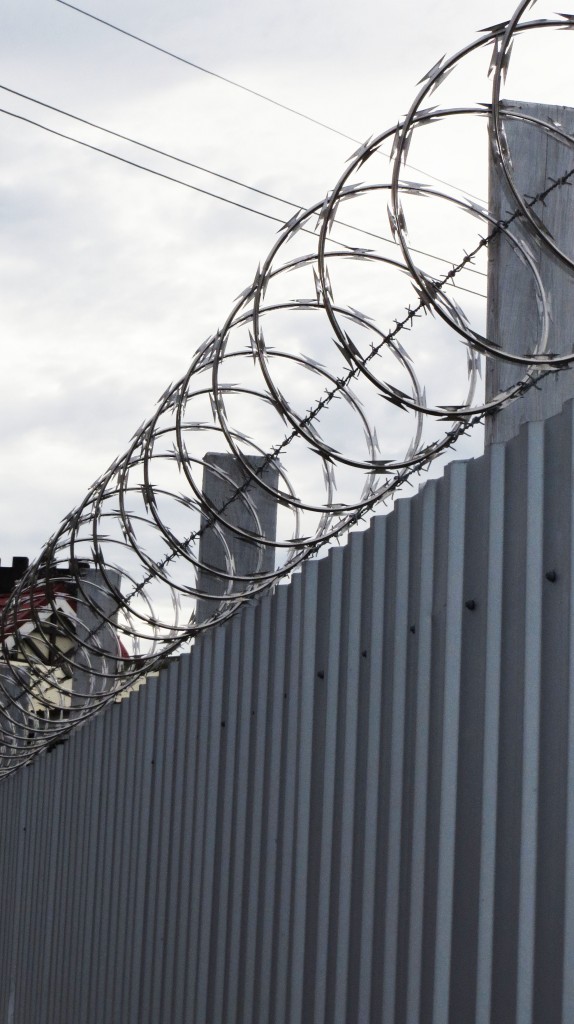 A Bridgetown building hidden behind a barbed-wire fence.

Dave and I wandered the streets, checking out small market stalls and run-down shops, before stopping for lunch at a pub overlooking the port of Bridgetown to grab a bite and a beer. 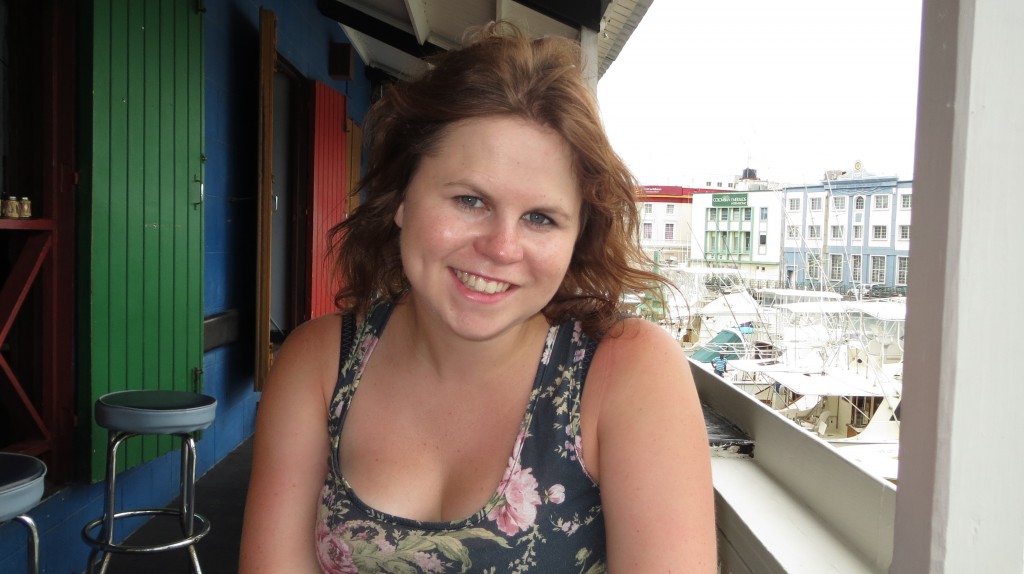 Time for a quick photo at lunch. 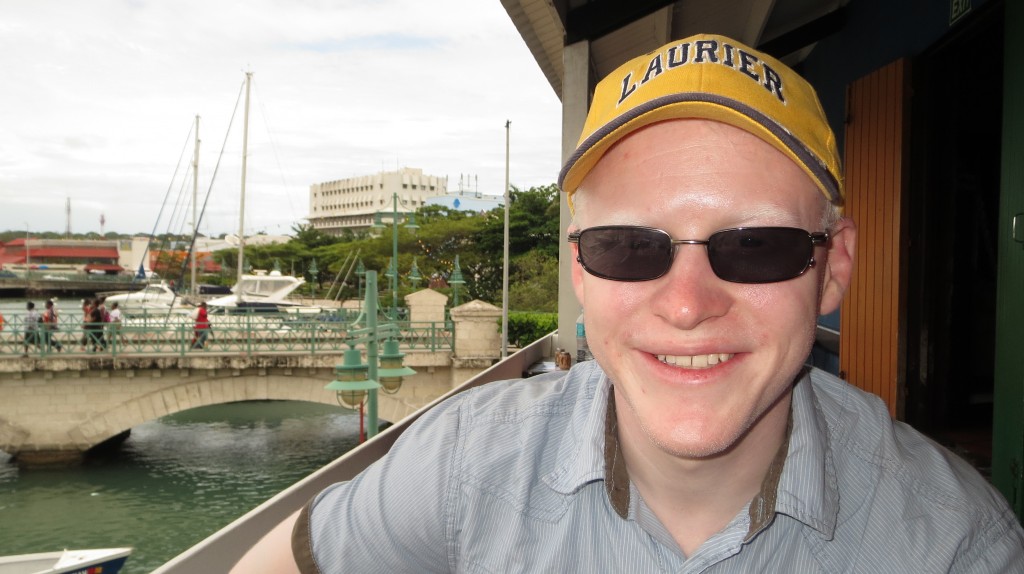 Dave smiles while waiting for lunch at the pub overlooking the port of Bridgetown.

With lunch enjoyed, we returned to the task at had.  The hot mid-day sun was tempered by a gentle breeze as we began our walk towards Queens Park to watch the Crop Over festival parade, passing strip-malls, decorated parks and small shops along the way. 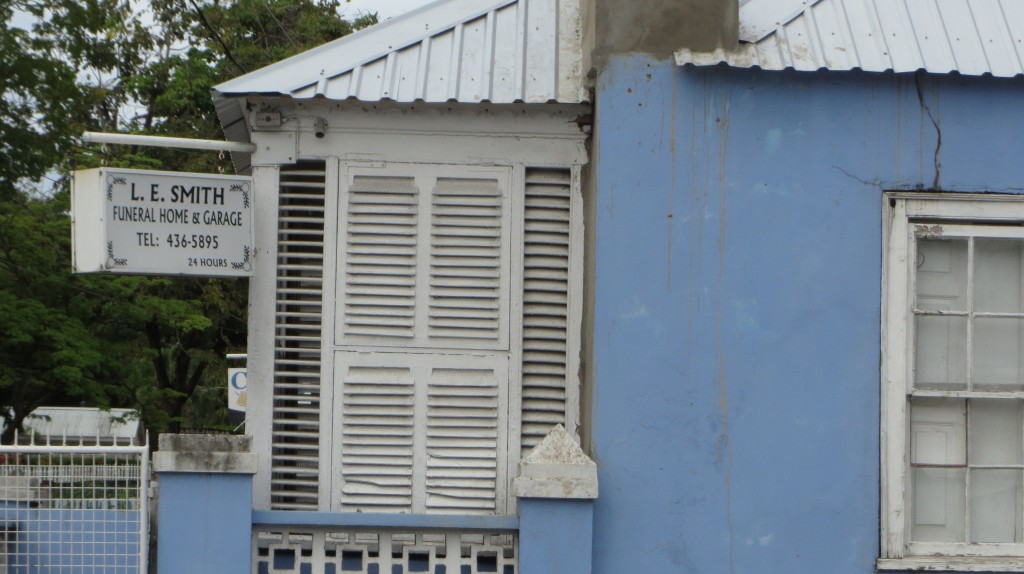 We weren’t expecting to see this unusual business combination as we walked towards Queens Park – a funeral home and garage!

Crop Over is the largest annual festival in Barbados. As the name suggests, the festival was designed to mark the end of a successful sugar cane harvest. It has history dating back several hundred years and, although the festival was discontinued in the 1940s as the sugar industry in Barbados declined, it was revived in 1974 and is once again an annual tradition for the Bajan people. 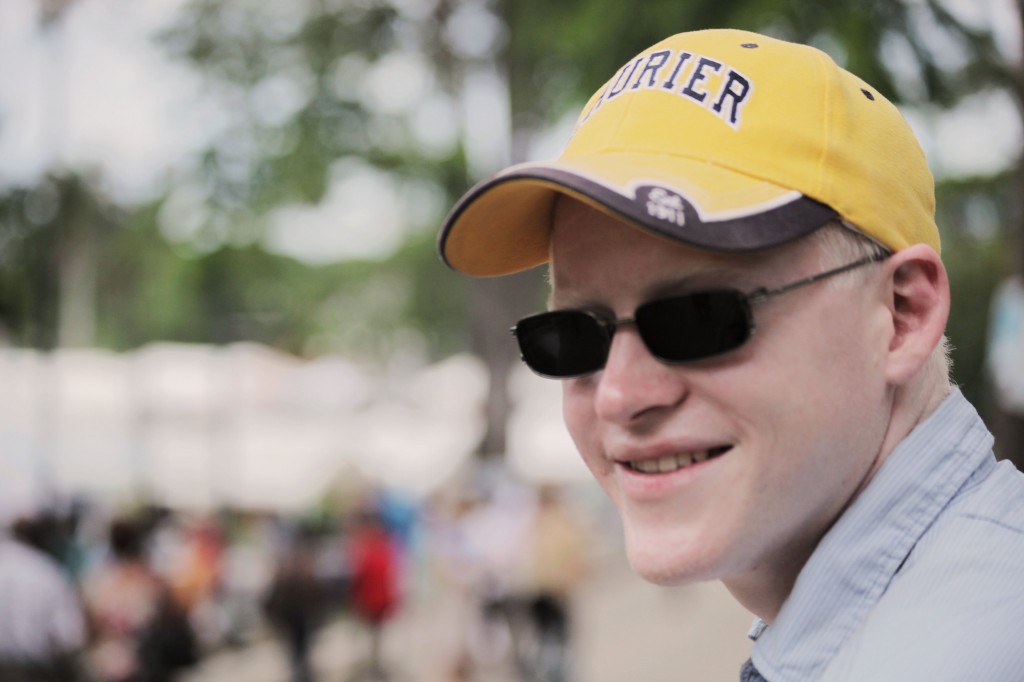 Dave waiting eagerly for the Crop Over parade to begin. 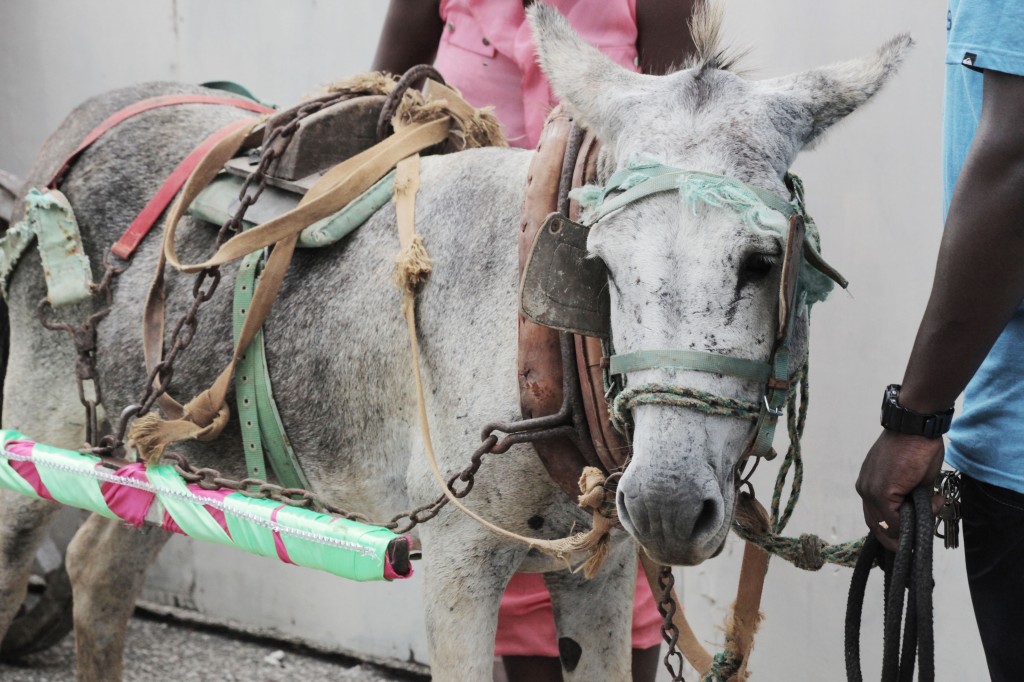 A festive donkey waiting for the Crop Over parade in Queens Park.

Dave and I made our way to the beautiful Queens Park and found a spot along the parade route to wait for the festivities to begin.  After a half-hour wait, the sounds of music, drumming and cheering began filling the air and an excited crowd of sequenced-dressed dancers, period-dressed actors, eager supporters, and musicians, erupted onto the street. 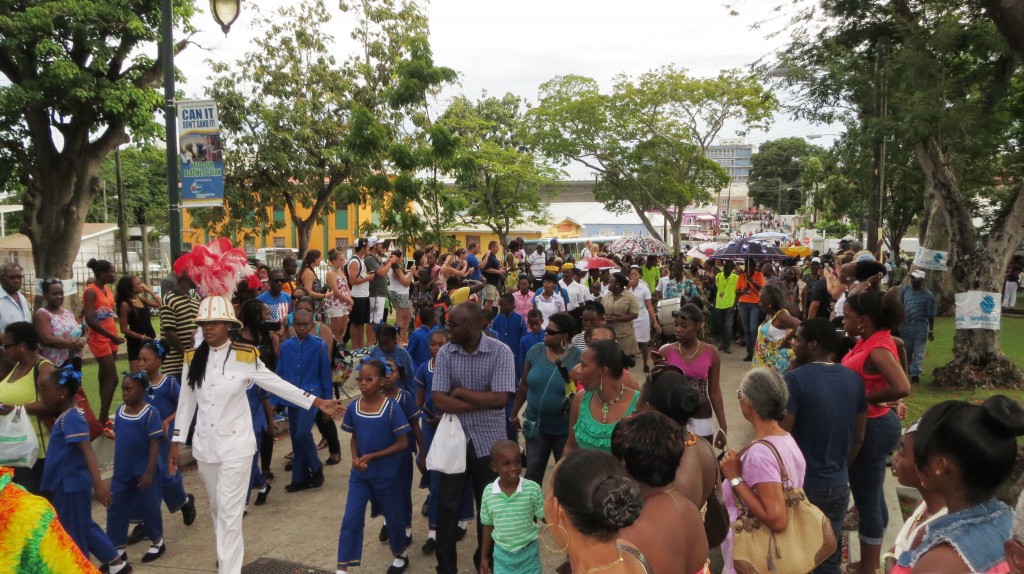 The Crop Over parade arrives!  At times it was hard to tell who was in the parade and who was spectating as many people walked alongside.

Within minutes, the route was flooded with people: spectators, participants and eager supporters. It was a huge festival, quite different than those I’ve seen before. Instead of large floats and decorated cars blasting tunes from the radio, most participants walked or danced to the beat of the closest steel drum band.

The parade proceeded through the park towards a main stage.  Each group then walked or danced in turn across stage while the announcer welcomed the group to the festival for the crowds and TV cameras.

Tens of thousands of people came from across the island to take part in the festival. It was a fantastic day, filled with bright colours, bold dancers, and big smiles and I’m glad I was there to be part of it.